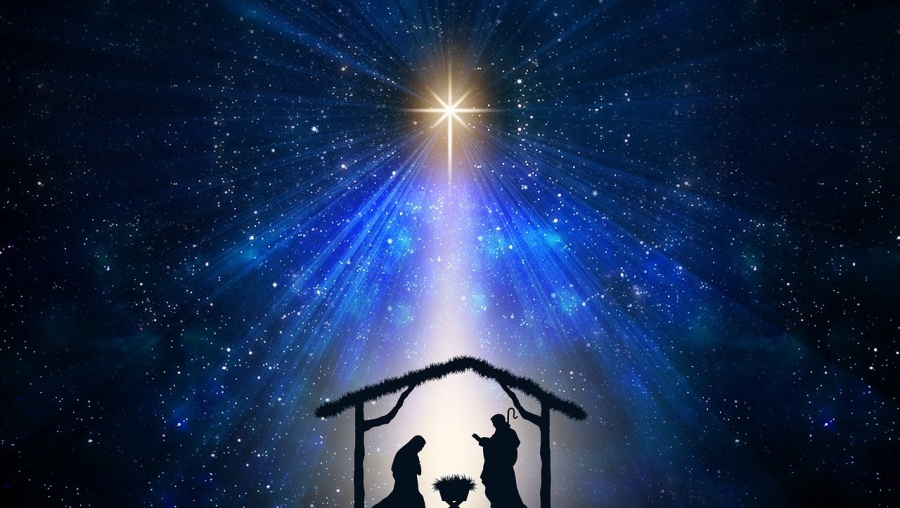 The people who walked in darkness
have seen a great light;
upon those who dwelt in the land of gloom
a light has shone.
You have brought them abundant joy
and great rejoicing,
as they rejoice before you as at the harvest,
as people make merry when dividing spoils.
For the yoke that burdened them,
the pole on their shoulder,
and the rod of their taskmaster
you have smashed, as on the day of Midian.
For every boot that tramped in battle,
every cloak rolled in blood,
will be burned as fuel for flames.

For a child is born to us, a son is given us;
upon his shoulder dominion rests.
They name him Wonder-Counselor, God-Hero,
Father-Forever, Prince of Peace.
His dominion is vast
and forever peaceful,
from David’s throne, and over his kingdom,
which he confirms and sustains
by judgment and justice,
both now and forever.
The zeal of the LORD of hosts will do this!

In those days a decree went out from Caesar Augustus
that the whole world should be enrolled.
This was the first enrollment,
when Quirinius was governor of Syria.
So all went to be enrolled, each to his own town.
And Joseph too went up from Galilee from the town of Nazareth
to Judea, to the city of David that is called Bethlehem,
because he was of the house and family of David,
to be enrolled with Mary, his betrothed, who was with child.
While they were there,
the time came for her to have her child,
and she gave birth to her firstborn son.
She wrapped him in swaddling clothes and laid him in a manger,
because there was no room for them in the inn.

Now there were shepherds in that region living in the fields
and keeping the night watch over their flock.
The angel of the Lord appeared to them
and the glory of the Lord shone around them,
and they were struck with great fear.
The angel said to them,
“Do not be afraid;
for behold, I proclaim to you good news of great joy
that will be for all the people.
For today in the city of David
a savior has been born for you who is Christ and Lord.
And this will be a sign for you:
you will find an infant wrapped in swaddling clothes
and lying in a manger.”
And suddenly there was a multitude of the heavenly host with the angel,
praising God and saying:
“Glory to God in the highest
and on earth peace to those on whom his favor rests.”

This is a Christmas post. Absolutely no tolerance will be given to any off topic comments. Please respect the intent and nature of this post, keeping it open for Christmas greetings and comments.