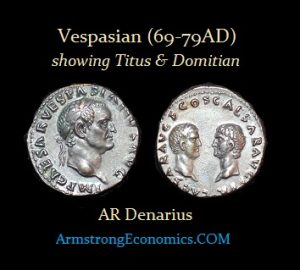 Do we know if Vespasian meant his last words as ironic or literally? It seems that a man of his history meant it ironically.

That he was mocking the Roman idea of the emperors that they would become a god after their death.

ANSWER: Vespasian was known for his jesting. I think when his mortality was slipping away, he knew he was no god for he lacked such power. The Roman historian Suetonius reported that Vespasian said, “Vae, puto deus fio” which can be translated to “I think I’m becoming a god.”

I would say that his last words were one of question about the afterlife. Roman emperors were often deified upon death. For a senate to clear someone a god seems to lack any power to make such a rule in the afterlife. There were no miracles to be attributed to a person to declare that they are a saint. So one would think he was perhaps mocking the tradition rather than accepting he was becoming a god.

The Romans believed that death was defined as the separation of body and soul. They certainly did believe in an afterlife. They also believed that the deceased person could only find peace when the physical body was buried or cremated in a proper manner and all ceremonies were conducted appropriately. Otherwise, the soul would haunt the family if they disrespected them in this manner. 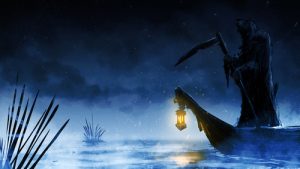 It was a tradition for the Romans to put a coin under the deceased family member’s tongue so they can pay Charon to cross the river Styx. In this manner, they would journey to the afterlife and not haunt the family.