Democrat Presidential candidates Senators Bernie Sanders and Elizabeth Warren unveil plans to tax wealth progressively to fund Medicare for All, and the valiant fight against man-made climate change. Sen. Sanders says, “Billionaires should not exist,” and brags that his plan would deplete their fortunes by half in just 15 years. Is the new populist majority, tapped by Donald Trump, ready to stick it to the billionaires in order to fund Utopian Progressive dreams? Can Bernie or Betsy ride this populist rage to the White House? Watch Bill Whittle’s classic video “Eat the Rich”: https://youtu.be/661pi6K-8WQ Bill Whittle Now with Scott Ott is a production of our Members. Join them now at https://BillWhittle.com/register/

Re-Posted from The Conservative Tree House on September 23, 2019 by sundance

Oh how the controlled media don’t want people to share the message delivered by Rudy Giuliani Sunday during his interview with John Roberts.  The thought police are out in full control operations today (long and familiar story), I digress.  Now we share information with counter-control processes in place.  Hat Tip Michael Sheridan for Video

Rudy Giuliani appeared Fox News this morning to once again discuss and outline the Joe Biden Ukraine issues with Maria Bartiromo.  [Video and counter-control back-up below]

It does not seem accidental this Ukraine story is being hyped by interests in DC and their allies in the media at the exact time when DOJ-IG Michael Horowitz is set to release his extensive report on potential FISA surveillance abuses by the intelligence community.

Here’s the full backstory with back-up Giuliani interview below:

Both Poroshenko and Zelensky administrations had tried, unsuccessfully, to get information to current U.S. officials. U.S. State Department officials in Ukraine were refusing to give visa’s to Ukrainian emissaries because they did not want the damaging information sent to the President Trump administration.

However, after delivering the information and not hearing back from the U.S. government, the Ukrainian government, now led by President Zelensky, interpreted the silence as the Trump administration and U.S. government (writ large) being upset about the Ukraine involvement overall. Out of concern for a serious diplomatic breakdown, the Zelensky administration made a personal request to the U.S. State Department for assistance.

The U.S. State Department then reached out to Trump’s lawyer Rudy Giuliani; and asked him if he would meet with Zelensky’s top lawyer, Andrei Yermak.

Rudy Giuliani agreed to act as a diplomatic intermediary and met with Yermak in Spain. After the meeting, Mr. Giuliani then contacted the State Department Officials in charge of Ukraine and Europe and debriefed them on the totality of the subject matter as relayed by Andrei Yermak.

All of this activity preceded the phone call between U.S. President Donald Trump and Ukranian President Volodymyr Zelensky.

President Trump and President Zelensky discussed the issues, and this phone call is the one now referenced by the concerned “whistleblower”. The “whistleblower” obviously had no knowledge of the background and why the subject matter discussed in the phone call was framed as it was.

Apparently in the phone call, President Zelensky was explaining what action the Ukranian government had already taken to try and get the information about corrupt U.S. officials, including former VP Joe Biden, to the U.S. government.

It was from this clarification of information that President Trump is reported to have told Zelensky it was OK to proceed with any internal investigation of corruption in Ukraine that might also encompass former U.S. officials.  Yes, that would include Joe Biden.

From this context we can see how the “whistle-blower”, knowing only half of the information – would seek to weaponize the story with a false narrative. Additionally, there’s a possibility the “whistle-blower” may be ideologically aligned with the same government entities that were trying to block the Ukrainian government from delivering the information in the first place.

At the end of this fake news narrative parade, these will be the questions that remain.

It should be emphasized the Intelligence Community Inspector General (ICIG); the guy who accepted the ridiculous premise of a hearsay ‘whistle-blower‘ complaint, who was “blowing-the-whistle” based on second hand information of a phone call without any direct personal knowledge, is Michael K. Atkinson.

ICIG Atkinson’s self-interest:  Michael K Atkinson was previously the Senior Counsel to the Assistant Attorney General of the National Security Division of the Department of Justice (DOJ-NSD). That makes Atkinson senior legal counsel to John Carlin and Mary McCord who were former heads of the DOJ-NSD in 2016 when the stop Trump operation was underway.

[Irony Reminder: The DOJ-NSD was purposefully under no IG oversight. In 2015 the OIG requested oversight and it was Sally Yates who responded with a lengthy 58 page legal explanation saying, essentially, ‘nope – not allowed.’ (PDF HERE) All of the DOJ is subject to oversight, except the NSD.]

Put another way, Michael Atkinson was the lawyer for the same DOJ-NSD players who: (1) lied to the FISA court (Judge Rosemary Collyer) about the 80% non compliant NSA database abuse using FBI contractors; (2) filed the FISA application against Carter Page; and (3) used FARA violations as tools for political surveillance and political targeting.

Yes, that means Michael Atkinson was Senior Counsel for the DOJ-NSD, at the very epicenter of the political weaponization and FISA abuse.

Immediately after the Carter Page FISA warrant is approved, in the period where DOJ-NSD head John Carlin has given his notice of intent to leave but not yet left, inside those specific two weeks, the National Security Division of the DOJ tells the Foreign Intelligence Surveillance Court (FISC) they have been breaking the law.  The NSD specifically inform the court they are aware of contractors who have been using FISA 702(16)(17) database search queries to extract information on political candidates.

DOJ Inspector General Michael Horowitz has looked into the FISA application used against U.S. Person Carter Page.  Additionally, U.S. Attorney John Durham is said to be looking at the intelligence communities’ use of systems for spying and surveillance.

If the DOJ-NSD exploitation of the NSA database, and/or DOJ-NSD FISA abuse, and/or DOJ-NSD FARA corruption were ever to reach sunlight, current ICIG Atkinson -as the lawyer for the process- would be under a lot of scrutiny for his involvement.

Yes, that gives current ICIG Michael Atkinson a strong and corrupt motive to participate with the Schiff/Lawfare impeachment objective.

Re-Posted from The Conservative Tree house on September 23, 2019 by sundance

Re-Posted from The Conservative Tree House on September 21, 2019 by sundance

(Via NBC) […] While there have been several other recent polls of the crucial first-in-the-nation caucus state, the Des Moines Register’s Iowa Poll, conducted by Des Moines-based pollster Ann Selzer, is widely considered to be the most accurate, so its Saturday night releases have become must-watch events for Iowa politicos.

The poll was released after the entire 2020 Democratic presidential field gathered in Des Moines Saturday for the annual Steak Fry, a fundraising event hosted by the local Democratic Party club.

Warren surged 7 points in the poll since the June survey, while Biden lost a bit of ground, putting them neck-and-neck inside the poll’s margin of error.

Sanders and Mayor Pete Buttigieg of South Bend, Indiana, both slipped significantly, down 5 and 6 percentage points, respectively, leaving Buttigieg at 9 percent, down from 15. (more)

A surging Sen. Elizabeth Warren is challenging Joe Biden’s dominance in the race for the Democratic nomination, standing at 22% to the former vice president’s 20% in a new CNN/Des Moines Register/M…

706 people are talking about this

Re-Posted from The Conservative Tree house on September 17, 2019 by sundance

Elizabeth Warren is the Democrat primary candidate with momentum.  While the top five names have not changed, the support is firming up.  Joe Biden remains at the top of the poll with 31 percent. Elizabeth Warren has now surged to second with 25 percent; and it appears most of angry Sanders loss in support has gone to ‘I’ma-git-me-a-beer‘ Warren.

In the survey, conducted after the third in the Democratic Party’s series of debate, the former vice president draws 31% compared to 25% for the Massachusetts senator. At 14%, Vermont Sen. Bernie Sanders trails Warren by a double-digit margin while 15 other candidates receive support of 7% or less.

Biden builds his edge on dominance among three chunks of Democratic primary voters. He commands 49% among African-Americans, 46% among senior citizens, and 42% among moderate and conservative Democrats.

But after months of steady progress, Warren boasts formidable strengths of her own. She leads Biden by roughly two-to-one among liberals and Democrats under 35, breaks even among whites, and holds a double-digit edge among those seeking large-scale change in the post-Trump era. That last group represents a majority of the Democratic electorate. (more)

Re-Posted from The Conservative Tree House on September 15, 2019 by sundance

Joe Biden tells the story of his chain-wielding face-off with a gang of rusty razor-wielding ne’er-do-wells led by a black guy named ‘Corn Pop.’

If only Corn Pop mamma had him listenin’ to some of them record players, none of this would’ve happened.

Re-Posted from The Conservative Tree house on September 12, 2019 by sundance

The ABC debate with Democrat candidates is tonight from 8:00pm to 11:00pm EDT on ABC and Univision.

Re-Posted from The Conservative on September 7, 2019 by sundance

A clear example of a candidate who will lie.  During a campaign event Kamala Harris was asked by an audience member (with a microphone): “what are you going to do in the next one year to diminish the mentally retarded action of this guy”?

However, today, facing backlash from the term “mentally retarded“, candidate Harris claims she did not hear the words he used in the question.   You decide.

Kamala Harris
✔@KamalaHarris
When my staff played the video from my town hall yesterday, it was upsetting. I didn’t hear the words the man used in that moment, but if I had I would’ve stopped and corrected him. I’m sorry. That word and others like it aren’t acceptable. Ever. https://twitter.com/CBSNews/status/1170434381003001857 …
CBS News
✔@CBSNews

Yesterday, someone at a @KamalaHarris event called Pres. Trump “mentally retarded.”
The 2020 candidate told @CHueyBurns the term is “incredibly offensive” and said in 2019 you would think “people would have a much better understanding of how hurtful a term like that can be.” 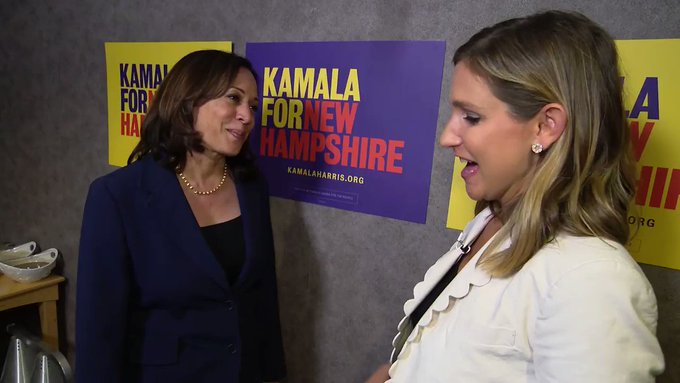 6,939 people are talking about this