Posted originally on The Conservative Tree House on June 22, 2020 by sundance

This has the potential to be very embarrassing for NASCAR.

The images above are from a 2017 NASCAR “GarageCam” walk through during the  NASCAR Camping World Truck Series garage at Talladega Superspeedway.  The rope with a “noose” on the end is a simple method to pull down the garage door to close it.  The noose provides a place to put your hand/wrist when closing the door.

Hat Tip Tazio Nuvolari who shares: “My guess on the “noose” incident in Talledega, watch this video, look close at the Talladega garage doors. Each one has a rope hanging down with a loop on the end to pull down the doors. One probably broke and someone just tossed it aside, then the crew member found it and thought it was something it wasn’t, now NASCAR is trying to figure out how to explain their stupidity.”

The ropes and “nooses” are clearly visible [particularly at 03:20] as the cameraman goes from garage bay to garage bay.  There are several rope nooses visible and a few of them are severely worn from use.  Check it out:

Is this just a simple misunderstanding amid a climate where NASCAR is sensitive to the current racial narrative sweeping the nation?

Did the Bubba Wallace team accidentally make a major headline grabbing story out of a simple mistaken perspective?  Or was the mistaken impression purposefully misunderstood by either the team or the organization to gain attention?   You decide.

According to the media:

ALABAMA – […] The discovery of the noose Sunday afternoon in Wallace’s garage stall comes as the United States, and NASCAR in particular, more squarely address America’s systemic racism in the wake of the police killing of George Floyd.

Wallace, the only Black driver in NASCAR’s top circuit, has been an outspoken advocate of the Black Lives Matter movement and the corresponding protests against racism and police brutality. He wore an “I Can’t Breathe” shirt before one event, repainted his car with the “Black Lives Matter” phrase and pushed NASCAR to ban the Confederate flag.

NASCAR said it is investigating the noose, and federal investigators said they will review the incident as well.

“We are angry and outraged, and cannot state strongly enough how seriously we take this heinous act,” NASCAR’s statement read. “We have launched an immediate investigation, and will do everything we can to identify the person(s) responsible and eliminate them from the sport.”

The racing organization said there is no place for racism in NASCAR and that the incident “only strengthens our resolve to make the sport open and welcoming to all.”

In addition, the US Attorney’s office for the Northern District of Alabama, FBI and the Department of Justice Civil Rights Division are reviewing the incident, US Attorney Jay E. Town said in statement.

“Regardless of whether federal charges can be brought, this type of action has no place in our society,” Town said.

A source with Richard Petty Motorsports told CNN that Wallace never saw the noose.  A member of his team discovered it and immediately brought it to NASCAR’s attention, the source said.

Wallace tweeted Sunday that the “despicable act” left him “incredibly saddened and serves as a painful reminder of how much further we have to go as a society and how persistent we must be in the fight against racism.”

“This will not break me, I will not give in nor will I back down. I will continue to proudly stand for what I believe in,” Wallace said.  (read more)

The odds that almost every garage door in the Talladega motor speedway has these garage door pull-downs that look like nooses, and this was not exactly what the “member of the team discovered”, is very small.  These are the exact garages that housed Bubba Wallace’s car.

These pull-downs are almost certainly what Wallace’s team reported to the NASCAR officials that started this international headline story.  [A Shorter Video to SEE]

48K people are talking about this 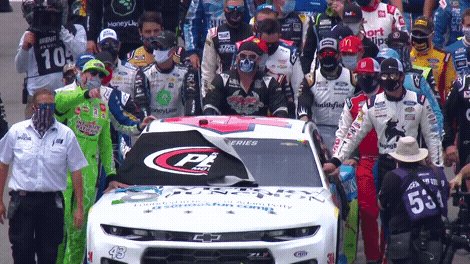 10.1K people are talking about this

MAJOR UPDATE:  We were finally able to locate a picture of Bubba Watson’s garage door.  The picture below was taken Monday, June 22, 2020 while FBI investigators were reviewing the incident.  The source of the picture is HERE: Racing News.

TALLADEGA, ALABAMA – The #43 Victory Junction Chevrolet, driven by Bubba Wallace (not pictured), waits in the garage area prior to the NASCAR Cup Series GEICO 500 at Talladega Superspeedway on June 22, 2020 in Talladega, Alabama. (Getty Images)

Now here’s the same picture with some important notations.  Look at the manual garage door pull-down rope on bay #4.  Notice how short it is compared to the adjacent bay #5.

We have a video from November 2019 at Talladega speedway showing the garage door pull-down for bay #4.   Many of the garage bay doors have those “noose” looking pull-downs to make it easier to use your hand.  Clearest visibility of Bay #4 at 00:53

You can clearly see in the video that Garage Bay door #4 had a hand loop tied into it.

That hand-loop, which could be claimed as a noose if that’s what you are predisposed to be looking for, was there in November of 2019 when the video was taken.  That hand loop, possibly misconstrued as a “noose” has been cut-off in the picture taken yesterday.

It wasn’t a noose, it was a hand loop to help make closing the garage door easier; and it wasn’t put there for Bubba Wallace, because it was there in November 2019.

Additionally, in November of 2019 no-one would know what garage bay would be assigned to Bubba Wallace in June of 2020.  It’s absolutely ridiculous to see this as targeted hate.

100% proof positive evidence of the situation.

(1) Was this incident purposefully misconstrued as a “hanging noose” to drum up racial controversy by Bubba Wallace’s NASCAR team?

(2) And was that intentional mistake made exponentially worse, purposefully, by NASCAR going public and orchestrating a ridiculous PR campaign around it?

(3) Were all those involved pulling off a demonstrable hoax in an effort to politicize and capitalize on a controversy?  With full forethought and selfish intent?

(4) Or was this some big, stupid, oversensitive misunderstanding?