Re-Posted from the Canada Free Press By Judi McLeod —— Bio and Archives—April 8, 2020

‘The Time of the Coronavirus’, which has shut down the entire world, is a daily digital horror show in America, where you can watch Gruesome Twosome, Doctors Anthony Fauci and Deborah Birx predict by computer-generated models what is coming your way, followed regularly by media gang-ups on President Donald Trump during ‘Question’ periods.

Most of us don’t know what’s coming tomorrow—but doomsayer Dr. Anthony Fauci, director of the National Institute of Allergy and Infectious Diseases, does.

The medical guru told a coronavirus press briefing on Monday that the world may never return to the “normal” that was known before the outbreak.

Down though the annals of time, it’s been the prophets, soothsayers, fortune tellers and global warming/climate change experts who claim to know what’s coming tomorrow.

Now that an ‘invisible enemy’ is striking all countries of the world, infecting people of all ages, it’s Fauci from a stage of the White House.

“When we get back to normal, we will go back to the point where we can function as a society,” he said.  He continued, “If you want to get back to pre-coronavirus, that might not ever happen in the sense that the threat is there.” (Fox News, April 7, 2020)

So, according to the good doctor, we can’t get back to pre-coronavirus as long as its threat is still there.

Otherwise, a thriving world without the threat of viruses will be impossible to find.

No White House correspondent chose the opportunity to ask Fauci: ‘How do you know’?

Daily Coronavirus pressers streamed from the White House show a daily lineup of media members, who, rather than asking meaningful questions to get precious information back to a watching public, trying to outdo each other on attacking the president instead.

“As of early Tuesday morning, the coronavirus has been blamed for 74,000 deaths globally. Health experts in some of the hardest-hit areas have reported a decline in new infections, but the U.S. is expecting a very challenging next few weeks. (Fox News)

“Fauci said Sunday that people must be prepared for a resurgence next year, which is why officials fighting the pandemic are pushing for a vaccine and clinical trials for therapeutic interventions so “we will have interventions that we did not have” when this started.

“He said Monday that he is encouraged about therapies and “confident that over a period of time we will get a good vaccine, that we will never have to get back to where we are right now.”

Isn’t that the same thing that billionaire One-Worlder Bill Gates is saying?

Up to now White House correspondents have remained patently polite and downright tolerant of Fauci and Birx, so there have been no suspicions of collusion between the medical duo and ‘inquiring’ journalists.

“The internet is going wild over a video clip from the end of President Trump’s daily Coronavirus briefing. (American Mirror, April 7, 2020)

“Before I explain that, let me give you the leadup.

“During the briefing, President Trump got into a savage exchange with ABC’s Jon Karl. It was so epic, that many are calling it one of Trump’s biggest takedowns of a fake news reporter in a long while.

“President Trump referred to Karl as a “third rate reporter” and told him he’d never “make it.”

“But it’s what happened afterward that has most people buzzing.

“At the close of the briefing, Dr. Fauci exits the room last.

“You can watch the video below:

“You’re a third-rate reporter. What you just said is a disgrace — you will never make it.” @realDonaldTrump

I absolutely LOVED watching @jonkarl get DESTROYED in this presser 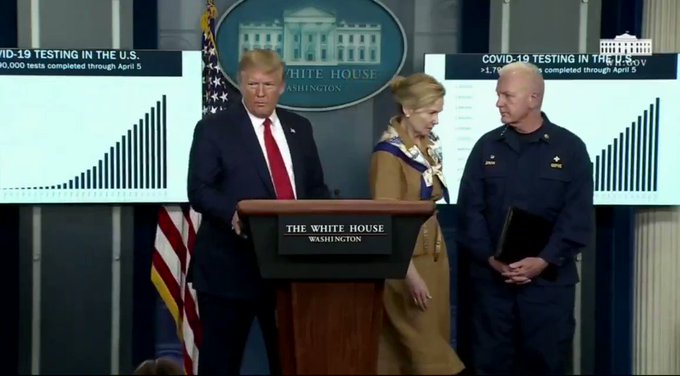 481 people are talking about this
“Many people found the exchange between the two men very odd and commented about it online.

Seems like Fauci & Karl were coordinating the antagonism toward @realDonaldTrump today. 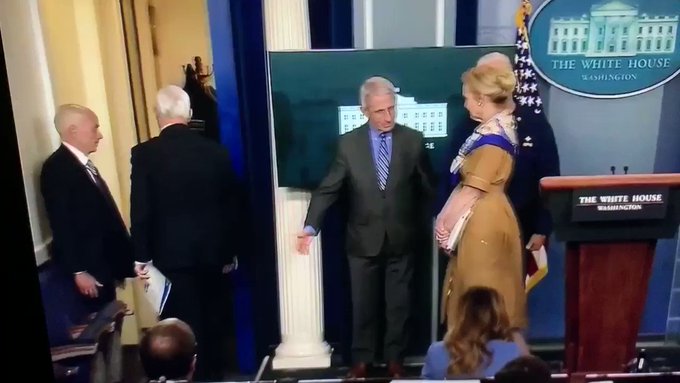 6,012 people are talking about this

While the gruesome twosome hold centre stage in the Coronavirus outbreak coverage and the media outdo each other with who can ask the most stupid question, why is no one asking why social distancing never came up during any of the killer seasonal influenza outbreaks, or about the state of hygiene in many of our hospitals:

“In the United States, the Centers for Disease Control and Prevention estimated roughly 1.7 million hospital-associated infections, from all types of microorganisms, including bacteria and fungi combined, cause or contribute to 99,000 deaths each year.  (Wikipedia)

“In Europe, where hospital surveys have been conducted, the category of gram-negative infections are estimated to account for two-thirds of the 25,000 deaths each year.

“Nosocomial infections can cause severe pneumonia and infections of the urinary tract, bloodstream and other parts of the body.

“Many types display antimicrobial resistance, which can complicate treatment.

Meanwhile, Dr. Fauci should be told about his doomsday predictions:  “Since you already stole our present, you can quit messing with our future any time now.”