Re-Posted from The Conservative Tree House on June 24, 2019 by sundance

When General Michael Flynn entered into the seemingly coerced plea agreement with the special counsel team and prosecutor Brandon Van Grack (November 30, 2017), he gave up the right to defense discovery in his case.  In hindsight this will likely be viewed a mistake.

(h/t Techno Fog) During a court appearance today by new attorney Mrs. Sidney Powell, the topic of needing a classified security clearance -to review documents- was raised.  The DOJ responded to the assertion by saying no classified information was provided to the prior Flynn defense team, therefore Ms. Powell doesn’t need not carry that concern.

However, by admitting the DOJ provided no classified information to the defense, the prosecution is simultaneously admitting they never provided Flynn with a copy of the phone call transcript (December 29, 2016) between President-elect Trump’s incoming National Security Advisor and Russian Ambassador Sergey Kislyak.  The content of that phone call lies at the heart of the FBI interview that took place on January 24th, 2017.

Judge Emmet Sullivan originally asked for the Flynn/Kislyak transcript; however, the prosecution said it was irrelevant to their case.  The judge accepted the non-production.

· 17h
Former national security advisor Michael Flynn appeared in federal court today for a status conference in his criminal case. His new lawyer, Sidney Powell, said Flynn is still expected to testify in Bijan Kian’s trial in EDVA and that his cooperation is “fully ongoing.”

Powell raised the possibility of needing a security clearance and said she may need to review classified information. But prosecutors say they did not turn over any classified info as part of discovery. Prosecutors & the judge seemed confused about what the info might be.

151 people are talking about this

The judge ultimately decided that the defense team, prosecutors and the court’s classified information security officer should be in touch and figure out if the judge needs to step in.

Flynn’s lawyers asked for his travel restrictions to be lightened (and let him travel to NC/Texas/Calif. freely) but the judge denied it. He said he didn’t want to give Flynn preferential treatment. The judge ordered a status report in Flynn’s case for the last day in August.

138 people are talking about this

Techno Fog@Techno_Fog
This statement by prosecutors would confirm they never produced the transcripts of the Kislyak calls to Flynn. https://twitter.com/MikeBalsamo1/status/1143207200334241795 …
Mike Balsamo

Powell raised the possibility of needing a security clearance and said she may need to review classified information. But prosecutors say they did not turn over any classified info as part of discovery. Prosecutors & the judge seemed confused about what the info might be.

740 people are talking about this
It is suspected Flynn may have been under a FISA surveillance warrant which seems confirmed by the Weissmann/Mueller report. The FBI intercepted, recorded, and later transcribed the December 29, 2016, conversation.

This is why the issue of how the FBI agents write the 302 summary of the Flynn January 24, 2017, interview becomes such an important facet.

On June 6, 2019, the DOJ released the FBI agent report (FD-302) written after their interview of Michael Flynn on Jan 24th, 2017. (Full pdf below) From prior testimony we know that FBI Agent Peter Strzok did the questioning and FBI Agent Joe Pientka took notes.

For some reason, within the DOJ release of the report they are continuing to redact the name Joe Pientka. [Could be due to ongoing employment]

It’s worth noting according to Mark Meadows the Office of Inspector General Michael Horowitz has interviewed Joe Pientka extensively; prior attempts by congress to gain testimony from Pientka were blocked by the FBI and Rod Rosenstein.

FBI Agent Joseph Pientka was never interviewed by the joint House judiciary and oversight committees (Goodlatte and Gowdy). The reason, as explained by Meadows, was simple; Pientka was on Weissmann and Mueller’s special counsel team. Congress was not allowed to interfere in the Mueller probe. In hindsight this looks like Weissmann, Mueller & Rosenstein strategically using the investigation as a shield from sunlight.

The interview took place on January 24, 2017. The report was written Jan 24th, 2017. The wording was then deliberated by the small group, approved by FBI Deputy Director Andrew McCabe, and entered into the record on February 15th, 2017.

Prosecutor Brandon Van Grack filed a cover letter attempting to explain the reason for the Flynn interview on January 24th, 2017, and a delay in the official filing of the interview notes (FD-302) on February 15th, 2017, and then another edit on May 31st, 2017.

What the special counsel appeared to be obfuscating was a process of deliberationwithin the investigative unit, headed by FBI Deputy Director Andrew McCabe, surrounding the specific wording of the 302 report on the Flynn interview. Likely how best to word the FBI notes for maximum damage.

In late 2018 Prosecutor Brandon Van Grack was attempting to hide the length of the small group deliberations within the FBI. In hindsight it seems he did not want the court to know Andrew McCabe was involved in shaping how the Flynn-302 was written.

However, we know there was a deliberative process in place, seemingly all about how to best position the narrative, because we can see the deliberations in text messages between Lisa Page and Peter Strzok: See below (note the dates):

The text message conversation above is February 14th, 2017.

The Michael Flynn FD-302 was officially entered into the record on February 15th, 2017, per the report:

It was a deliberative document from the outset. Thanks to the Strzok/Page text messages we know the 2018 cover letter from the Special Counsel is misleading. The Feb 15th, 2017, date was the day after McCabe approved it (three weeks after the FBI interview).

May 17th, 2017, Robert Mueller was assigned as special Counsel. Then, the FD-302 report was re-entered on May 31st, 2017, removing the header; paving the way for Mueller’s team to use the content therein.

The original authorization for the appointment of Special Counsel Robert Mueller was May 17th, 2017.  The recently released Weissmann report shows there were two additional scope memos authorizing specific targeting of the Mueller probe.  The first scope memo was August 2nd, 2017, OUTLINED HERE, and is an important part of the puzzle that helps explain the corrupt original purpose of the special counsel.

As you review the highlighted portion below, found on pages 12 and 13 of the Weissmann report, read slowly and fully absorb the intent; the corruption is blood-boiling:

General Flynn was under investigation from the outset in mid-2016. The fraudulent FBI counterintelligence operation, established by CIA Director John Brennan, had Flynn as one of the early targets when Brennan handed the originating electronic communication “EC” to FBI Director James Comey on/around July 31st, 2016.

The investigation of General Flynn never stopped throughout 2016 and led to the second investigative issue of his phone call with Russian Ambassador Kislyak:

The first redaction listed under “personal privacy” is unknown. However, the second related redaction is a specific person, Michael Flynn Jr.

In combination with the October 2017 timing, the addition of Flynn Jr to the target list relates to the ongoing 2016/2017 investigation of his father for: (1) possible conspiracy with a foreign government; (2) unregistered lobbying; (3) materially false statements and omissions on 2017 FARA documents; and (4) lying to the FBI.

This October 20th, 2017, request from Weissmann and Mueller aligns with the time-frame when special counsel team lawyers Brandon L. Van Grack and Zainab N. Ahmad were prosecuting Michael Flynn and cornering him into a guilty plea.

Getting Rosenstein to authorize adding Mike Flynn Jr. to the target list (scope memo #2) meant the special counsel could threaten General Flynn with the indictment of his son as a co-conspirator tied to the Turkish lobbying issue (which they did) if he doesn’t agree to a plea. Remember: “jointly undertaken activity“.

Forcing a plea for ‘lying to investigators‘ by threatening prosecution for FARA violations was the identical strategy used against both George Papadopoulos and Michael Flynn.

The amount of twisted pressure from this corrupt team of prosecutors is sickening.  A month later, General Flynn was signing a plea agreement: 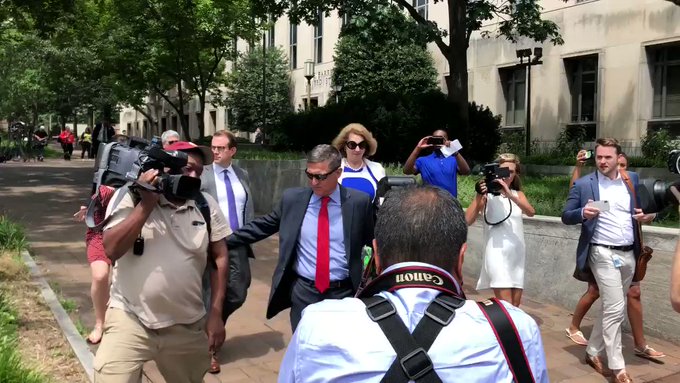 Megan Mineiro@MMineiro_CNS
Michael Flynn emerges from federal court Monday without commenting on the outcome of his first appearance with new counsel Sidney Powell.