Re-Posted from The Conservative Tree House on September 19, 2019 by sundance

To fully absorb the backstory to the latest allied effort between politicians and the intelligence apparatus, it is helpful to remember when the Vice-Chair of the SSCI, Senator Dianne Feinstein, abdicated her position after the 2016 election.

For years CTH has discussed the internal dynamic of Democrat politicians (legislative branch) working in concert with Intelligence Community (executive branch) officials to protect their interests. Ultimately the biggest example of this surfaced when Donald Trump won the 2016 election despite the efforts of the deep state. Trump became target #1.  Remember also, Feinstein’s chief-of-staff, Dan Jones, leaving and going to work on the outside including paying Fusion-GPS to keep up their efforts?

We have provided the trail of overwhelming evidence, showing how the intelligence apparatus writ large, including select members of the Gang-of-eight, were working with politicians (House and Senate) against candidate, president-elect and President Trump. No doubt the internal plans therein was a step too-far for Feinstein. She bailed.

However, Feinstein’s departure was only one aspect, there were many more – including: Senator Harry Reid working with CIA Director John Brennan on the dossier distribution (letter to FBI etc.); the 2017 censure of HPSCI Devin Nunes, after discovery of the Trump campaign unmasking etc; the 2016 use of FBI/NSA databases by political operatives and “contractors” to extract opposition research; and obviously the combined efforts of the CIA, DNI, FBI and DOJ in what is now known as “spygate”, the surveillance of the Trump campaign.

These examples show a synergy between Democrat politicians in power and the intelligence apparatus.  These examples are not theoretical, they are highlighted by evidence including: admissions to the FISA court by the DOJ/FBI; outlines from the DOJ inspector general; and even evidence withinthe indictment and arrest of SSCI Security Director James Wolfe.

It is through that prism of known political corruption and documented intelligence community conspiracy effort – that all claims from “former officials within the intelligence apparatus” should be considered. There was, and I would argue still is, an effort by the Legislative branch. I quote myself:

The problem for Attorney General Bill Barr is not only investigating what we don’t know, but rather navigating through what ‘We The People’ are already aware of….

A branch of the United States government (Legislative) was attempting a coup against the incoming leader of another branch of government (Executive); by using the Intelligence Community and designated corrupt agents within the executive branch cabinet. (more)

Remember, this stuff comes in pre-planned waves.  These efforts are well coordinated, planned and then rolled out by legislative democrats.  They are assisted by their corrupt and ideological allies in the Lawfare group who operate as middle-men between the politicians, left-wing allied teams and the media narrative engineers.

That understanding underscores the latest effort du-jour from Adam Schiff:

WaPo – The whistleblower complaint that has triggered a tense showdown between the U.S. intelligence community and Congress involves President Trump’s communications with a foreign leader, according to two former U.S. officials familiar with the matter.

Trump’s interaction with the foreign leader included a “promise” that was regarded as so troubling that it prompted an official in the U.S. intelligence community to file a formal whistleblower complaint with the inspector general for the intelligence community, said the former officials, speaking on the condition of anonymity because they were not authorized to discuss the matter publicly.

It was not immediately clear which foreign leader Trump was speaking with or what he pledged to deliver, but his direct involvement in the matter has not been previously disclosed. It raises new questions about the president’s handling of sensitive information and may further strain his relationship with U.S. spy agencies. One former official said the communication was a phone call.  (more)

On an optimistic note…. Inasmuch as there are ongoing corrupt Machiavellian efforts, there are also elements within the intelligence apparatus trying to excise the corruption.  Remember, there has been an ongoing series of controlled “black hat hunting” efforts that have led to many discoveries of the embedded IC usurpers.

Also remember, some element within the IC carried out the operation that changed the dates on the FISA application given to the SSCI as part of the hunting effort.  That operation ultimately captured James Wolfe.  Despite the internal corruption within the DOJ that allowed Wolfe to exit without accountability for the classified document leaks, at least we know there is some internal entity, somewhere, working on finding them.

This latest -seemingly desperate- effort by some “anonymous former official” [[cough, Sue Gordan, cough]] making claims and requesting whistle-blower protection will likely backfire for all the same reasons prior efforts have failed.  President Trump is the most transparent politician in history.

Don’t look for too much more than political manipulation of this story.  Keeping with all prior explosive claims that turn out to be nothingburgers, the “whistleblower” is likely making nothing more than a strategic political decision.  The President has unlimited ability to conduct U.S. foreign policy, including who he talks to and what agreements are made therein.  If people don’t like the outcomes, well, that’s what elections are for.

The possible declassification of intelligence material, now under the control of AG Bill Barr; that could outline so much prior corruption and simultaneously expose this alignment between UniParty politicians and the corrupt intelligence community; likely has the entire network very, very, nervous…. Just think about the downstream consequences from declassifying the Rosemary Collyer report?  That declassification alone could mean generational damage to the domestic U.S. intelligence apparatus, DOJ-NSD and FBI.

If I had to hazard a guess based on timing, prior events, prior political advocacy, prior political demands and protestations, and prior alignment by the democrats toward an intelligence official; the connections would indicate Lawfare alignment with former ODNI Principal Deputy Director Sue Gordon.  However, that’s just a supposition – and if we wait a while (usually six days) we’ll see if that suspicion is accurate. 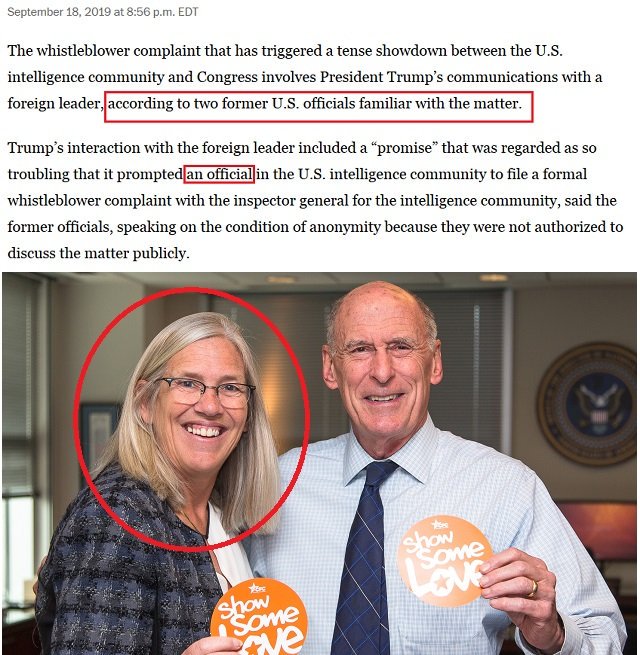 Remember all of the vociferous praise and accolades from the democrat politicians demanding her appointment to the position of DNI? Well….

420 people are talking about this

It has been 120 days since President Trump empowered AG Bill Barr to release the original authorizing scope of the Mueller investigation which began on May 17, 2017.  A Mueller investigation that concluded five months ago, and yet we are not allowed to know what the authorizing scope was?…. Nor the 2nd DOJ scope memo of August 2nd, 2017?… Nor the 3rd DOJ scope memo of October 20th, 2017?….

Additionally, since the 2018 list was developed, more information has surfaced about underlying material.  This added to the possibility of documents for declassification:

♦ President Trump can prove the July 31st, 2016, Crossfire Hurricane counterintelligence operation originated from a scheme within the intelligence apparatus by exposing the preceding CIA operation that created the originating “Electronic Communication” memo. Declassify that two-page “EC” document that Brennan gave to Comey.  [The trail is found within the Weissmann report and the use of Alexander Downer – SEE HERE]

♦ Subpoena former DOJ-NSD (National Security Division) head John Carlin, or haul him in front of a grand jury, and get his testimony about why he hid the abuse from the FISA court in October 2016; why the DOJ-NSD rushed the Carter Page application to beat NSA Director Admiral Mike Rogers to the FISA court; and why Carlin quit immediately thereafter.

♦ Prove the Carter Page FISA application (October 2016) was fraudulent and based on deceptions to the FISA Court. Declassify the entire document, and release the transcripts of those who signed the application(s); and/or depose those who have not yet testified. The creation of the Steele Dossier was the cover-up operation. [SEE HERE]

♦ Release all of the Lisa Page and Peter Strzok text messages without redactions. Let sunlight pour in on the actual conversation(s) that were taking place when Crossfire Hurricane (July ’16) and the FISA Application (Oct ’16) were taking place.  The current redactions were made by the people who weaponized the intelligence system for political surveillance and spy operation.  Why are Page and Strzok texts still redacted!