Re-Posted from The Conservative Tree House on January 15, 2020 by sundance

Sickening.  Earlier today Speaker Nancy Pelosi held a media event signing ceremonycomplete with commemorative pens for dozens of her Democrat colleagues, and initiated the parade ceremony for the march across the Capitol with the articles.  Upon arrival at the upper chamber of congress, Senate Leader Mitch McConnell accepted delivery and began the process of organizing the procedure through a series of rules by unanimous consent.

[McConnell] “A few minutes ago, the Senate was notified the House of Representatives is finally ready to proceed with their articles of impeachment. So, by unanimous consent, we’ve just laid some of the groundwork that will structure the next several days.”

‘So the trial will commence in earnest on Tuesday.

‘But first, Mr. President, some important good news for the country: ‘We anticipate the Senate will finish the USMCA tomorrow and send this landmark trade deal to President Trump for his signature. A major victory for this administration, but more importantly, for American families.

‘Let me close with this. This is a difficult time for our country. But this is precisely the kind of time for which the framers created the Senate. I am confident this body can rise above short-termism and factional fever and serve the long-term best interests of our nation.

WTF did I just watch?

Pens on silver platters? Then wtf was with her signature? Is she signing ONE LETTER AT A TIME so everyone that gets a pen gest one that was actually used?

This was a celebration ceremony, this was Nacy’s victory lap! Enjoy it skank, payback is 10 mos away

3,972 people are talking about this

They claim it’s a somber, serious occasion they’re heartbroken over… and then they pass out impeachment-signing pens with special cases. Folks. You can’t make it up. https://twitter.com/FoxReports/status/1217571118942425089 …

So many pens that Pelosi will sign to officially transmit the articles of impeachment and sign resolution appointing House managers. Why so many? They will be given away to members like House managers as a symbol of today. 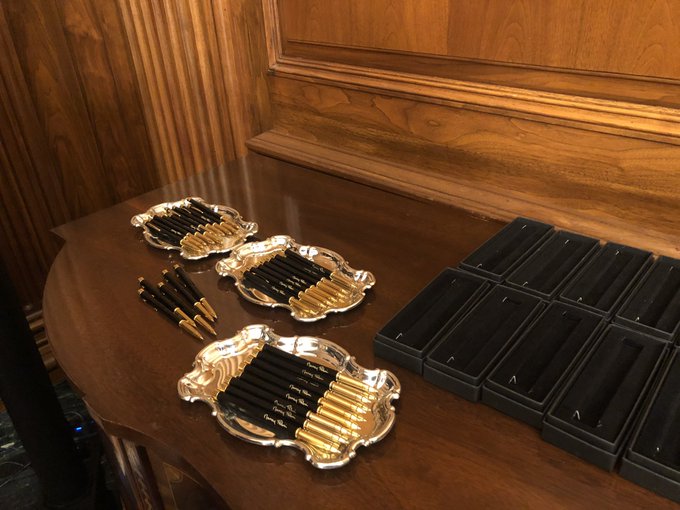 8,115 people are talking about this