Re-Posted from The Conservative Tree house on October 9, 2019 by sundance

According to the indictment Mr. Frese was caught leaking classified intelligence information to two journalists, one of which he was romantically involved.

Mr. Kyle Frese has a twitter account HERE. Cross-referencing information from within the indictment, research by Matthew Keys has indicated journalist #1 is Courtney Kube from NBC, and journalist #2 is Amanda Macias from CNBC.  The intelligence leaked by Mr. Frese to Ms. Macias likely revolves around North Korean defense systems. [DOJ Announcement Here]

WASHINGTON – A U.S. counterterrorism analyst was arrested at the Defense Intelligence Agency where he worked on charges related to alleged leaks of information to two journalists, the Justice Department said.

Both journalists and NBC and CNBC didn’t immediately respond to requests for comment.

FBI wiretapped DIA analyst Henry Kyle Frese, who allegedly leaked classified information to journalists at CNBC and NBC (and was romantically involved with one of them). https://dailycaller.com/2019/10/09/defense-intelligence-agency-leak-classified-journalists/ …

An analyst at the Defense Intelligence Agency has been charged with leaking top secret information about a foreign country’s weapons systems to journalists.

867 people are talking about this

Kyle Frese is Never Trump and an advocate for Endless War.

143 people are talking about this

BREAKING: In an extraordinary Sunday night statement, the White House announces that the US “will no longer be in the immediate area” of Northern Syria, allow Turkey to launch an invasion in the region and give Turkey responsibility for captured ISIS fighters in the area. 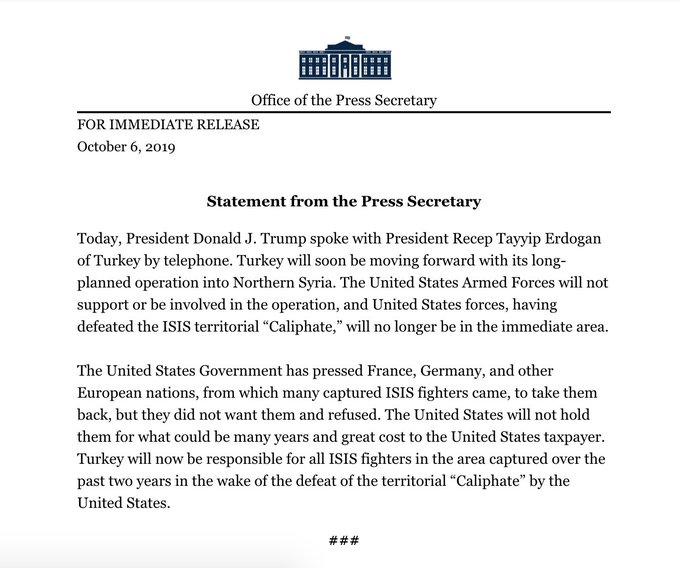 344 people are talking about this