Re-Posted from The Conservative Tree House on February 13, 2020 by sundance

An interview by AG Bill Barr today is making a lot of headlines. Within the interview Barr indicates that President Trump’s style of communication makes it more difficult for him to do his job.

Here’s the captured interview without pundit opinion. Watch the full interview yourself and decide:

It seemed possible yesterday, when AG Bill Barr agreed to testify to the House Judiciary Committee on March 31st, that one of the motives for Barr to coordinate a schedule two months in advance was to gain elbow room.

There never has been any coordination between President Trump and AG Barr on the agenda of the DOJ. However, by placing the testimonial date publicly on his agenda Barr seemed to be stating to those in/around the White House his intent for a disconnect from contact pending questions from highly partisan Democrats.

Given the nature of the highly partisan scrutiny; and considering the rabid media waiting to jump on any narrative engineering opportunity; and with the John Durham investigation outcome looming closer on the horizon; it makes sense for AG Barr to try and create an openly visible disconnect.

Nothing Bill Barr does and/or says will stop the media from falsely creating a narrative that says President Trump and Bill Barr are colluding to target their political opposition.

With that reality in mind, the answers in the ABC interview as delivered by Bill Barr only pour fire on a furnace of media intent to controversialize President Trump’s communication approach.

Barr’s intention may have been good (albeit selfish), but declaring that President Trump’s free speech and opinion as an impediment to Barr’s ability is just nonsense.

The emphasis is on the wrong syllable.

President Trump has the right to express his opinion and share his views with The People, the American electorate, who put him into office.  The President may do so in any form, manner, venue, method or presentation that fits his needs. Period. Fullstop.

If lawyers have their feelings hurt; or if the sensibility of judges is wounded; and if the judicial system of the U.S. government is so tenuous as to be affected by words and criticism; and if AG Barr cannot simply address the issues therein by appropriately positioning a mirror to highlight that nonsense; well, that is not President Trump’s issue.

The consequence he describes, the issues underpinning Barr’s expressed concern, only further emphasizes President Trump’s point about how the justice system is being compromised by politics and media. The simple application of law is being ignored; and the system, of which Bill Barr is the apex participant, is corrupted and diminished by man-made manipulation based on politics and other factors…

If President Trump saying “this case sucks” via Twitter is enough to collapse the institutional objectives of a modern judicial system… and impede the ability of the U.S. Attorney General to do his job, well, what does that say about how weak and compromised the guardians have allowed that system to become?

Then again, that level of institutional compromise explains exactly why a fraudulent impeachment attempt was even possible.

BREAKING: Attorney General Barr says President Trump’s tweets ‘make it impossible for me to do my job’ 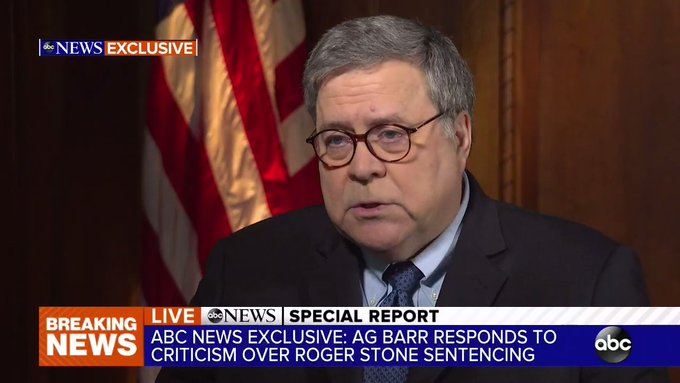 761 people are talking about this

Bill Barr talks about how he never talked to Trump about Stone. Also, Trump never asked him to investigate anyone but he could if he wanted to in specific areas.

Bill no too happy with the Tweets. I can see how that becomes a pain in the ass.

59 people are talking about this

In a new statement, Stephanie Grisham says Trump has “full faith and confidence in Attorney General Barr to do his job and uphold the law” and he “wasn’t bothered by the comments at all and he has the right, just like any American citizen, to publicly offer his opinions.”

1,111 people are talking about this