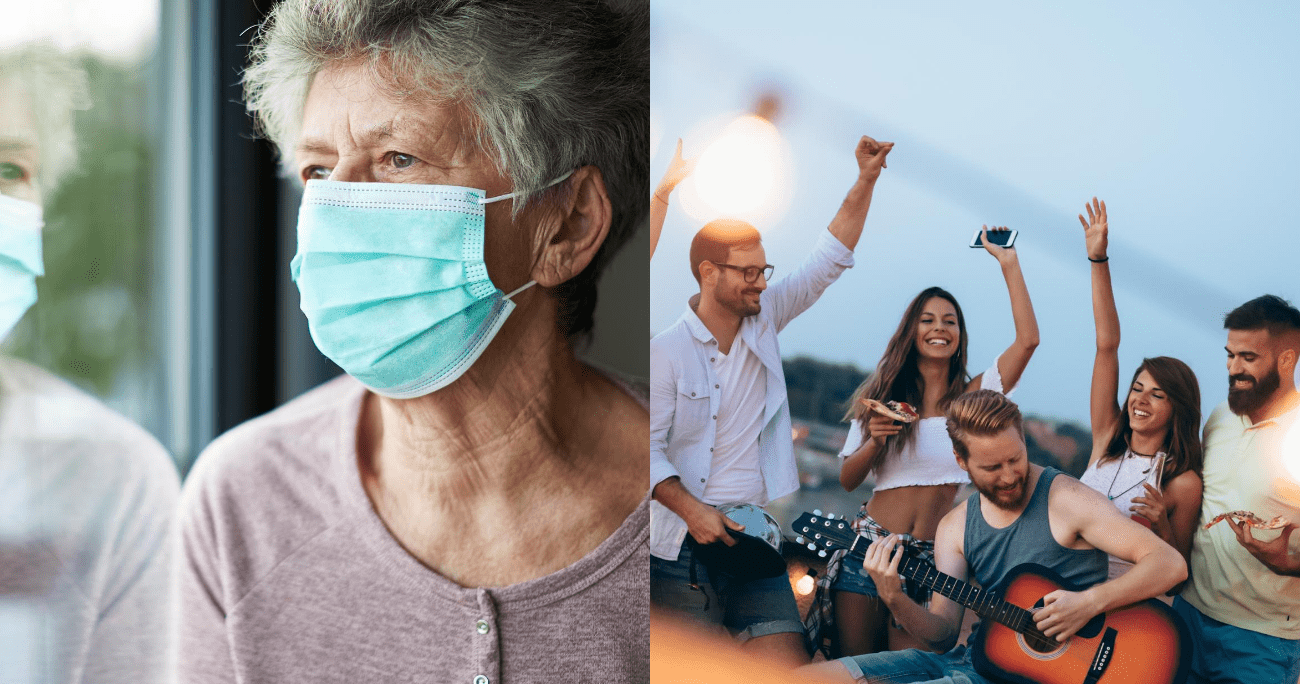 In concert with Rubin, multitudes of reporters and commentators have declared that Republican governors have worsened the effects of Covid-19 by “denying science” and reopening “too early.” Meanwhile, they have praised Democratic governors, like Andrew Cuomo of NY and Phil Murphy of NJ, for their handling of the pandemic.

By misusing anecdotes and stripping data of vital context, these media figures have woven a narrative that is at stark odds with reality. As documented below with credible primary sources, the hard facts show that:

The Bottom Line is Deaths, Not Cases

On a near-continual basis since the outset of the pandemic, Rubin and many of her media colleagues have cited rising numbers of C-19 cases to castigate Republican governors for mishandling the pandemic. A small sampling of their rhetoric includes statements like these:

Yet, more than a month after the accusations above were leveled, the C-19 death rate—or the portion of the population killed by the disease—in the state of: 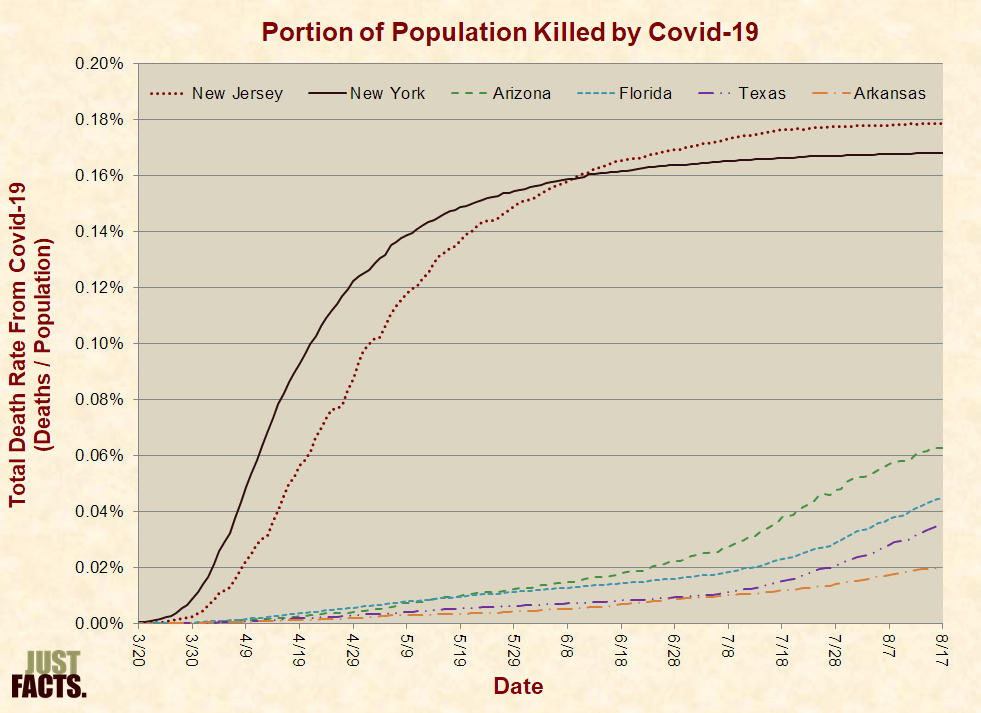 Of course, death rates could rise in the future, but there is a lag of about 15 days between C-19 symptom onset and death—and after more than 120 days of persistent media alarmism—there is no indication that Florida or any other Republican state is in danger of reaching the level of carnage in NY and NJ.

On their own, death rates don’t prove that Republicans have done a better job of handling C-19 than Democrats. This is because association does not prove causation, and numerous other factors are at play. However, preventing deaths is the ultimate goal of C-19 policies, and death rates undercut much of the media hysteria over rising cases in Republican states.

One key fact revealed by death rates is that there is not a fixed relationship between the number of C-19 cases and deaths. For example, the people currently contracting C-19 in Florida are relatively young, and thus, they are far less likely to die from it. During Florida’s first infection peak in April, about 25% of reported C-19 cases were among people aged 65 and older, but this figure plunged to 13% by August 5.

Death rates can also cut through the noise caused by changes in testing capacity. This is important because the vast majority of C-19 cases are mild or asymptomatic, and greater testing rates can detect such cases and distort trends. Between April 1 and July 13, the number of tests per day in Florida increased by 6.5 times. This can create an illusion of “exploding” cases when, in fact, Florida’s tame death rate suggests that a sizeable portion of the rise in cases is from more testing, which is a positive development.

In addition to ignoring death rates, Rubin and others have smeared Republican governors by calling them “science deniers” who defied “expert advice.” In reality, these governors have acted in accord with science, which is not the claims of cherry-picked “experts” but the “systematic knowledge of the physical or material world gained through observation and experimentation” (Webster’s College Dictionary).

States like Florida and Texas managed C-19 by focusing on the vulnerable and giving healthy people more flexibility to live their lives. This strategy is rooted in the following scientific facts:

Republican states that crafted their C-19 policies around the scientific facts above have drastically lower death rates than the oft-praised states of New York and New Jersey. Again, this association does not prove that Republican governors managed the virus better than their Democratic counterparts. However, it is flagrantly deceitful to report that Republican states “peddle denial,” put “the economy over health,” or failed “the Covid-19 test,” when in fact, their death rates are extremely low, and their actions align with crucial scientific facts.

In the same piece in which she vilifies “science-denying Republican leaders,” Rubin accuses them of having “blood on their hands” because they made “premature, rash and uninformed” decisions that led to “unnecessary deaths.” Yet, this description actually applies to the decisions of prominent Democrats, namely Phil Murphy and Andrew Cuomo (who Rubin lauds).

Both Murphy and Cuomo forced nursing homes to admit and readmit people who were infected with C-19. This mandate was at direct odds with two essential scientific facts that were widely known since the outset of the pandemic:

Including an estimated 18 days between infection and death, over 5,900 nursing home patients in NY and 3,400 in NJ were lost by the time Cuomo and Murphy rescinded their policies.

Furthermore, the NY nursing home death toll is greatly understated because Cuomo’s Department of Health excludes residents who catch the disease in a nursing home but die “outside of the facility.” Thus, the official figure may undercount the actual number by thousands of deaths.

While rejecting calls for an independent investigation, Cuomo has repeatedly blamed others for the nursing home carnage in his state, but none of his explanations hold water:

So in the face of proven scientific facts and crystal clear guidance from the CDC and CMS, these Democrat governors forced C-19 carriers into the vicinity of the people who are most vulnerable to it. Yet, Rubin, cheers Cuomo for taking “responsibility,” his “remarkable success” in battling C-19, and his “effective takedown” of President Trump’s science “denial.”

The impact of the media’s misinformation stretches well beyond politics and can have deadly consequences for American citizens. For a prime example, NJ Advance Media published an article by reporter Steve Politi titled, “‘I Hate Florida!’ How the Coronavirus Convinced One NJ Snowbird to Fly Back Home.” Politi writes:

Politi then applauds a NJ native’s rant against Florida and her decision to move back to NJ, thus implying that Jersey is much safer than Florida. Yet, Politi fails to mention that the C-19 death rate was 15.3 times higher in New Jersey than in Florida when he wrote this article.

Despite Florida’s large elderly population, who are at a much higher risk to die of C-19, the state’s death rate is still 4.0 times lower than New Jersey. This is nearly five months since the Miami Herald editorial board lectured Florida Governor Ron DeSantis to “act like you give a damn” about C-19 and “quickly” seek guidance from the governors of NY, CT, and CA. Since the time that the Herald gave this advice on March 22, Covid-19 deaths rates have progressed as follows: 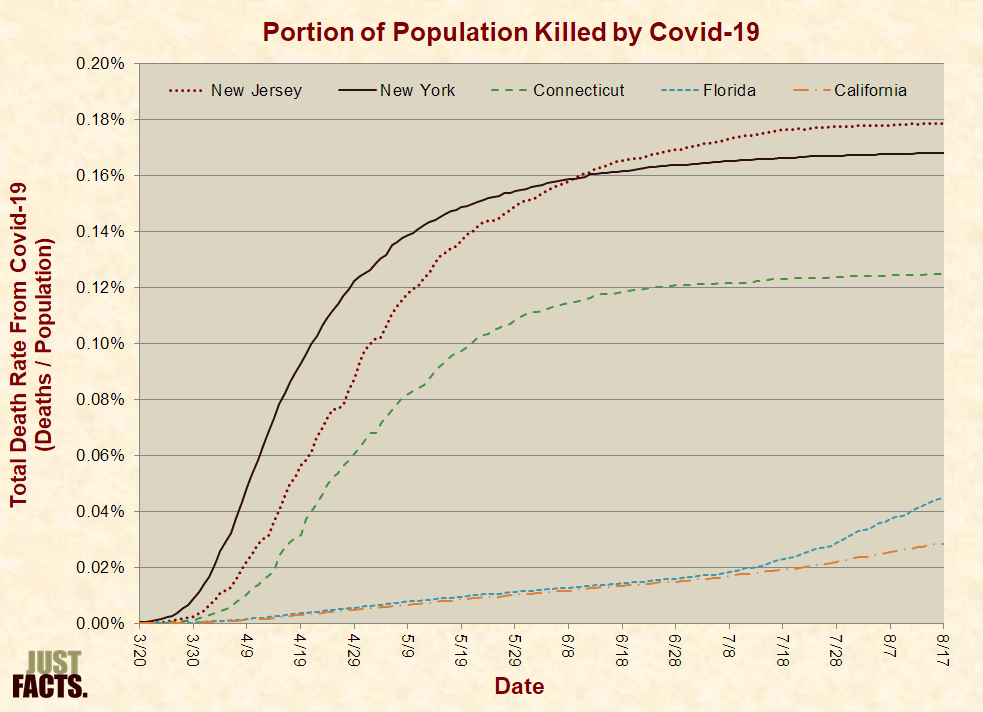 Rather than painting an accurate picture of reality, Rubin and many other people in the media have spread a counter-factual narrative that Republican states, like FL and TX, have mishandled C-19 while Democratic states like NY and NJ and done wonderfully. Masses of Americans make crucial life decisions based on what the media reports, and twisting facts is the worst possible way to ensure their health and safety.