Re-Posted from The Conservative Tree House on June 28, 2019 by sundance

During an earlier G20 discussion of technology in a fast digital age, President Trump highlighted the potential security compromises with the new 5G communication network.  This was an indirect shot toward China and the controversy surrounding Huawei with China’s Chairman Xi Jinping only separated from Trump by Prime Minister Shinzo Abe.

It would appear President Trump is in full confrontation mode, albeit diplomatically, as the highly anticipated meeting between Trump and Xi is going to take place at 10:30pm tonight.  We are likely, heck, almost guaranteed, to see a complete reversal in position between the two leaders as President Trump wears the panda mask to cover the Eagle glare.  This truly is the dance with the dragon.

After several years of background strategy, President Trump now has Chinese Chairman Xi Jinping in a tenuous position while the ramifications of the U.S-China trade dispute unfold around him and seemingly begin to collapse the One-Belt/One-Road supply chain Beijing has carefully planned.  Actual manufacturing and investment is now retreating from China as the U.S. President continues to use access to the U.S. market as leverage to retract the tentacles of Chinese economic expansion.

President Trump has a quiver full of economic arrows that are available to him; not the least of which is the possibility of enhanced tariffs toward even more Chinese products. Beijing cannot keep subsidizing industry to keep position, they are bleeding cash and the threats against Western corporations have only made matters worse.

President Trump continues to pour vociferous praise against his adversary, while simultaneously taking targeted action that is having a real impact in China.  This is the first time Beijing has encountered a western leader who deploys the exact same Chinese strategy of wearing a panda mask to cover the dragon objectives.

In an effort to regain position Chairman Xi has called Vice-Premier Liu He back to the front of the negotiations.  However, after the duplicitous collapse in talks, due to Beijing reneging on the deal Liu He worked with Lighthizer and Mnuchin, there is no longer any visible trust being afforded by President Trump.

OSAKA (Reuters) – U.S. President Donald Trump on Friday said he hoped for productive talks with Chinese President Xi Jinping on a trade war that is casting a shadow on global growth, but said he had not made any promises about a reprieve from escalating tariffs.

The trade feud and signs of a global slowdown have loomed over a two-day Group of 20 (G20) summit in the Japanese city of Osaka, where Trump and Xi met in passing and prepared for one-on-one talks on Saturday.

To lay the groundwork, Chinese Vice Premier Liu He met Trump’s treasury secretary, Steven Mnuchin, and Trade Representative Robert Lighthizer at the hotel where the U.S. delegation was staying, a source familiar with the talks said.

Expectations have dimmed that the world’s two biggest economies can ease tension when Trump and Xi meet.

“At a minimum it will be productive. We’ll see what happens and what comes out of it,” Trump told reporters after a series of meetings with leaders where he made clear that his priority was two-way trade deals to boost the U.S. economy.

Asked, however, if he had promised Xi a six-month reprieve on imposing new tariffs on a $300 billion list of Chinese imports, Trump said: “No.”

Trump has already imposed tariffs on $250 billion of Chinese imports and is threatening to extend those to another $300 billion of goods, effectively everything China exports to the United States. China has retaliated with tariffs on U.S. imports.

Now, stunningly look at this next excerpt from Reuters based on conversations from Beijing (emphasis mine).  This is a stunning shift in outlook from China:

“This accords with the interests of both countries and is what the international community is hoping for,” he told a news briefing.

China has consistently pushed back against criticism from Western countries, especially the United States and the European Union, about things like intellectual property rights and the difficulty of doing business in China.

“China’s promise to expand its opening up is not just a cheque that can’t be cashed,” Xi told German Chancellor Angela Merkel at a side meeting in Osaka.

Beijing never says “meet us halfway”, it’s not even part of their outlook; nor do they have a perspective of negotiation that includes such a disposition.  This is a key signal that Beijing is starting to realize the scale and scope of their tenuous position.

Into this mix we now see the importance of Modi beginning to surface.  If President Trump can get India to commit to an Indo-Pacific alignment that is less favorable to China, then in combination with the ASEAN groundwork already in place, the geopolitical circle will be closed.  Beijing will be isolated.

[…] “I think we’re going to have some very big things to announce. Very big trade deal,” Trump said before he began talks with Indian Prime Minister Narendra Modi. He gave no details.

The United States has pressed its allies to shun Huawei in their fifth generation, or 5G, networks on security grounds. Trump has also suggested easing U.S. restrictions on Huawei could be a factor in a trade deal with Xi.

“We actually sell Huawei many of its parts,” Trump said at his meeting with Modi. “So we’re going to be discussing that and also how India fits in. And we’ll be discussing Huawei.” (more)

And there you have it.  Japanese Prime Minister Shinzo Abe is the fulcrum for the reset. The ASEAN partners to include Vietnam, South Korea, Phillipines, and Japan are positioned as the economic investment beneficiaries.  India then closes the snare and Panda’s grand one-belt/one-road is trapped.

The meeting tonight between Chairman Xi and Presideent Trump (10:30pm EDT) will be very interesting.  No doubt Xi see’s his vulnerability… he must remain engaged and cannot be cut-out of the critical discussions.

This dynamic; this understanding by Xi, was visible yesterday in the video of the first group photo assembly.  Watch Chairman Xi approach President Trump, the power dynamic has shifted.  This is all new territory for Xi Jinping: 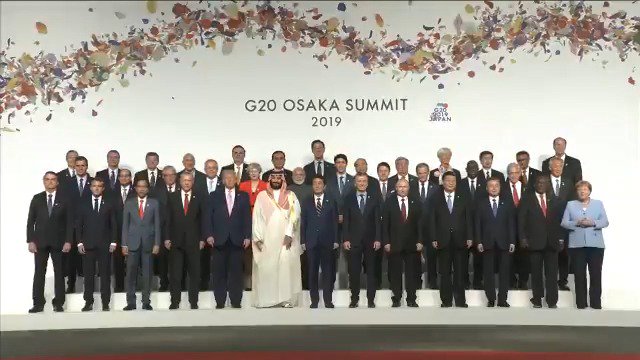 Leaders and attendees take part in a photo session at the #G20 summit in Osaka, Japan. More: https://reut.rs/2NiR6j8