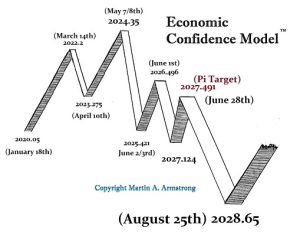 All the real science is warning that there is a reasonable chance that we are headed into a much colder period ahead. This will have an impact on food prices and out computer models have been warning that the next wave of the Economic Confidence Model should be an inflationary wave. Even a new study from  nature.com said: “The recent prolonged solar minimum and subsequent weak solar cycle 24 have led to suggestions that the grand solar maximum may be at an end.”

The next 8.6-year wave beginning in January should produce a collapse in confidence in governments which will result in a shift from Public to Private assets, but then on top of this, we see a shortage in agricultural markets adding to the inflationary wave coming. Then add the Monetary Crisis and Sovereign Debt Crisis cycles and we end up with some very interesting impacts during the next wave.