Re-Posted from The Conservative Tree House on September 19, 2019 by sundance

The mysterious “whistleblower” case now looks like a coordinated Democrat effort to block any investigation of presidential candidate Joe Biden for corrupt pressure on Ukraine to drop the investigation of Burisma, an energy company operating in the country, on which his son Hunter Biden was a board member.

In March 2016, then Vice-President Joe Biden warned Ukraine that $1 billion in loan guarantees would be withheld by the U.S. unless they replaced Viktor Shokin, the prosecutor general who was investigating Hunter Biden.  Ukraine did remove Shokin, and the prosecution was dropped.  It looks like a clear case of a quid-pro-quo.

However, as things are starting to shake out, the current obfuscation to protect Joe Biden is President Trump asking Ukraine’s new president Volodymyr Zelensky to take another look at the issues surrounding the former government’s decision to fire the Ukrainian prosecutor.  This is presumably the call concerning to the whistleblower.  To wit, democrats see this as Trump asking Ukraine to interfere in the 2020 election.

Washington Post – A whistleblower complaint about President Trump made by an intelligence official centers on Ukraine, according to two people familiar with the matter, which has set off a struggle between Congress and the executive branch.

The complaint involved communications with a foreign leader and a “promise” that Trump made, which was so alarming that a U.S. intelligence official who had worked at the White House went to the inspector general of the intelligence community, two former U.S. officials said.

Two and a half weeks before the complaint was filed, Trump spoke with Ukrainian President Volodymyr Zelensky, a comedian and political newcomer who was elected in a landslide in May.

That call is already under investigation by House Democrats who are examining whether Trump and his attorney Rudolph W. Giuliani sought to manipulate the Ukrainian government into helping Trump’s reelection campaign. Lawmakers have demanded a full transcript and a list of participants on the call. (read more)

Three Democrat-controlled house committees – Foreign Affairs, Intelligence and Government Reform – have announced that they will investigate whether a host of ethical and legal rules have been violated. 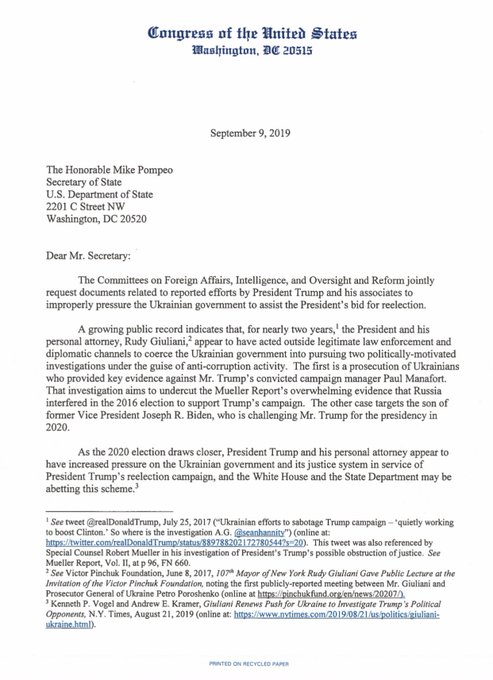 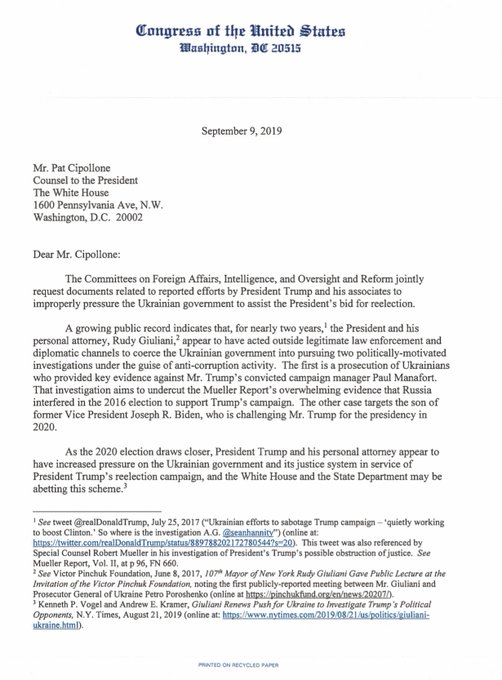 432 people are talking about this

From the Independent: […] The house committees’ chairs say they will scrutinise a telephone call between the US president and Mr Zelensky on 25 July, during which Mr Trump allegedly told the Ukrainian president to reopen the Biden investigation if he wanted to improve relations with the US.

They claim that Kurt Volker, the US special representative for Ukraine, was told to intercede with President Zelensky by the White House, and they are looking into the activities of Rudy Giuliani, Mr Trump’s personal lawyer.

Mr Giuliani urged Mr Zelensky soon after his election to focus on the Biden case, but the Ukrainian president is said to have refused, protesting that he did not want to get drawn into American internal politics.

This led to Mr Giuliani cancelling a trip to Kiev, saying he felt that he would be “walking into a group of people that are the enemies of our president … in some cases the enemies of the United States”. (more)