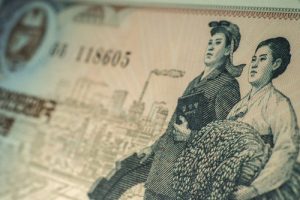 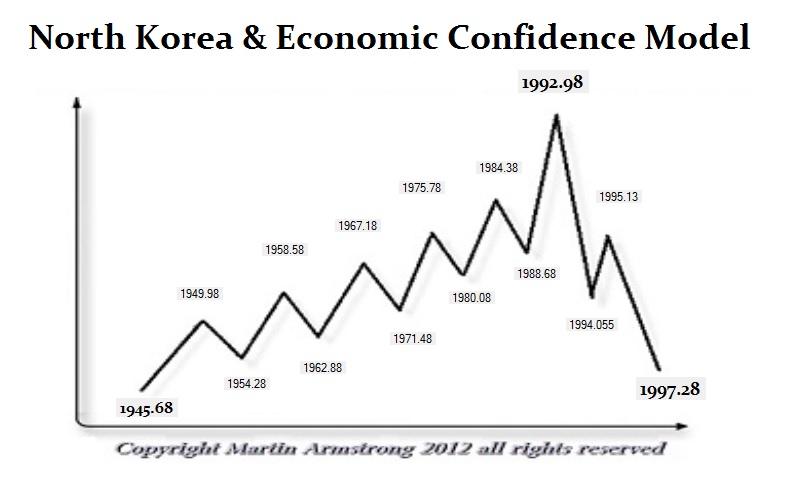 One of the reasons North Korea has such a large army is not patriotism. Those in the army are fed before everyone else. North Korea has always had a major problem — growing food. From a timing perspective, 72 years from the birth of the 38th parallel brought us to 2017. The War Cycle involving North Korea brings us to 2020.92. The 38th parallel of latitude was established on September 8, 1945 (1945.68). This arrangement proved to be the indirect beginning of a divided Korea that would lead to the Korean War (1950–1953). The war resulted in the Korean Demilitarized Zone (DMZ) and subsequent Cold War. However, the collapse of the Soviet Union in 1991 deprived North Korea of its main source of economic aid. Without Soviet aid, North Korea’s economy went into an economic freefall in 1992, which was pretty much in line with the Economic Confidence Model calculated from the birth of the 38th parallel.

Kim Jong-il was already conducting most of the day-to-day activities of running the state. His father, Kim Il-sung, died from a sudden heart attack on July 8, 1994. He became the General-Secretary of the Korean Workers’ Party. Kim Jong-un’s power lies in his secret police force, exactly as the Stasi held power in East Germany.

When Korea was split in 1945 into Communist North against the South, the terrain has always dictated the situation. About 65% of Korea’s heavy industry was located in the north, but, due to the harshness of the terrain, only 37% of its agriculture existed in the North. This is why the North often has bouts of famine. The crops are failing in North Korea exactly on time. The BBC has reported that the harvest is expected to be worse than usual, which is going to increase the already severe food shortages in the country and may result in a military crisis. I explained on March 29, 2018:

“The entire world is going to go nuts 2031/2032. There will not be a country that is spared from political and economic events. The risk a serious famine in North Korea which could result in the people rising up will arrive in 2023. That pressure will begin here this year 2018.70 – which will be September 13th, 2018. This appears to the turning point that is not just concerning North Korea. It is appearing around the world in many markets. The risk for political change in North Korea comes into play as soon as 2019/2020.”

We are looking at conditions that would normally lead to a revolution in North Korea. There will be a rise in civil unrest. The question becomes whether the army will stand behind Kim and increase international war tensions or divide to overthrow him. There is nothing like famine to force political change.