How many jobs were created since 2007 not last month

Based on the BLS July 3, 2014 Release USDL-14-1243 we have the following analysis using the numbers shown in Table B-1 and A-8. Then we use a DOD monthly report for Active duty military to add to the other two of 1.36 million soldiers. By doing this we get a more complete picture of those that are getting pay for some form of work and are therefore not on public assistance or retired. For reference that report claims that 288,000 jobs were created in June.

The first thing that came out when we look at what has happened since the high point of the previous growth period in October 2007 was that we are still short 394,630 jobs from then making this the slowest recovery on record. But there were categories of gains and categories of loss’s so what are they? 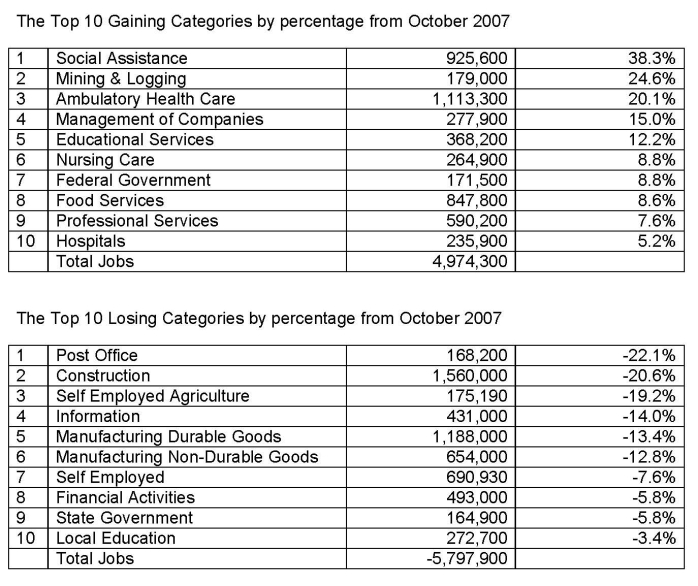 The total gains and losses for all the other categories give a net gain of 428,990 which when combined with the two table’s leaves us with a net loss of jobs since October 2007 of -394,630. But we also see that close to half of the gaining categories are low paying jobs and that most all the losing categories were good paying jobs. It would therefore appear that not only are there fewer jobs but there has been a shift out of traditional middle class jobs to lower paying personal service jobs in food service nursing homes and the like. Without seeing the income distributions that is speculation but the categories speak for themselves.

The only real winners in the past 7 years appear to be the upper middle class and the upper class as those categories of government workers, financial advisers, legal and doctors have increased.