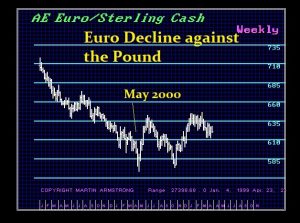 COMMENT: Dear Marty,
In your recent blog about BREXIT and the Yellow Hammer leak, you say: “British pound is still under pressure as the propaganda machine is in full force”.
Surely anyone can see is that the £ falls whenever no-deal propaganda is in the ascendancy, and £ rises when Remain or Brexit with a deal is trending higher???

REPLY: This is the same thing as when the pound was not going to join the euro. The propaganda was that the pound was going to collapse and Britain would not be able to export unless it joined the Euro. I cannot tell you how many companies we had to rescue from shorting the pound out of fear it would collapse. The propaganda even convinced the top German auto manufacturers, Mercedes, and they shorted the pound for two years worth of sales. The exact opposite took place. We were called in to reverse all the hedges that lost $1 billion because of that nonsense. They then set up a meeting with the board of Daimler which was separate back then. The board had passed a resolution that once a hedge was taken they would let it run. We made back the $1 billion for Mercedes and the last day of the fiscal year, Daimler and Mercedes were merged to hide the $1 billion loss at Daimler.

Despite all the propaganda that desperately tried to say Britain should ditch the pound and join the euro, what occurred was exactly the opposite of the underlying trend. The euro declined religiously into May 2000 before a sustainable rally took place. The number of short positions against the pound sterling was staggering. It felt like we became simply a British firm in those days putting out fires the bankers all started with their recommendations to short sterling.

With the propaganda machine, we are once again in the very same position with the same absurdity that the pound will crash and Britain will sink below the wave if they do not surrender sovereignty to Brussels.  They always preach the same doom and gloom about trade playing the same scenario with the same pitch we heard back in the 90s. They just roll out the same BS every single time.