Bill Gates was a ruthless businessman and used any means legal or not to achieve his goal. Ho he accomplished that is not the story here but the bottom line was after he retired he created a 501(c)(3)  Foundation, The Bill & Melisa Gates Foundation twenty years ago in 2000. The stated goal was the created an illusion that this foundation was created to help the poor and destitute of the world, nothing could be further from the truth. The foundation started off with $46.8 billion and Gates started giving large grants to implement his stated goals. 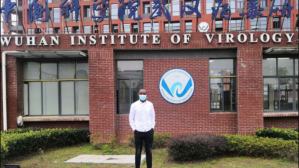 No one knows exactly how much money Gates gave away but it was, without doubt, tens of billions of dollars over the past 20 years. Gates made sure the world knew what he was doing through his extensive publicity efforts. However strangely the latest financial records of the foundation indicates that it’s assets are probably worth over $100 billion today. So it would seem that Gates was doing more than giving away grant money. So what was his real purpose of this foundation? 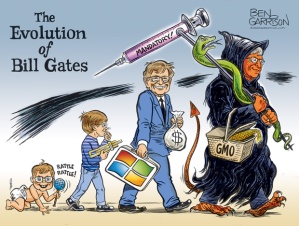 Initially his focus seemed to be on Climate change and how it was imperative that we stop using carbon based fuels that were creating Carbon Dioxide (CO2) and that was causing the temperature of the planet to increase and that that increasing temperature would in the near future destroy civilization itself.  Gates was not alone in this believe as Al Gore the former President Clinton VP was also on board with this idea. I became aware of this is a famous TED talk where Gates indicated that that to get to zero emissions of Carbon Dioxide production my humans would have to go to zero. Later it became obvious that this college drop out was not educated as he was being influence by those that followed the dis bunked theory of Tomas Malthus found in his 1798 book An Essay on the Principle of Population, Which basically stated that the growth of the population would out strip the ability to feed it and that would create famine and war. 222 years later, today, we know that was not true.  But Gates apparently does think it is true and it seems that his REAL GOAL is to significantly reduce the world’s population. 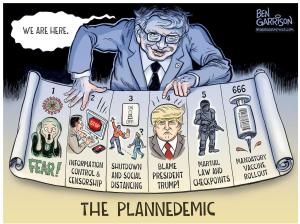 The following bits of videos will show that Gate and Fauci (a hired hand of Gates) probably created this COVID-19 pandemic in Wuhan China and hid its release in China and the World Health organization until it had spread world wide. This two both need to be tried for Crimes against Humanity for example from a NIH 2005 study, that found that “Chloroquine is a potent inhibitor of SARS coronavirus infection and spread.” Fauci has been rejecting the use of this and has been preaching the Gates vaccine solution. The report stated: 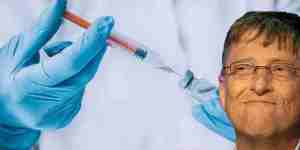 “We report, however, that chloroquine has strong antiviral effects on SARS-COV infection of primate cells. These inhibitory effects are observed when the cells are treated with the drug either before or after exposure to the virus, suggesting both prophylactic and therapeutic advantage. In addition to the well-known functions of chloroquine such as elevations of endosomal pH, the drug appears to interfere with terminal glycosylation of the cellular receptor, angiotensin-converting enzyme 2. This may negatively influence the virus-receptor binding and abrogate the infection, with further ramifications by the elevation of vesicular pH, resulting in the inhibition of infection and spread of SARS CoV at clinically admissible concentrations.

Chloroquine is effective in preventing the spread of SARS COV in cell culture. Favorable inhibition of virus spread was observed when the cells were either treated with chloroquine prior to or after SARS COV infection. In addition, the indirect immunofluorescence assay described herein represents a simple and rapid method for screening SARS-COV antiviral compounds.”