Posted originally on The Conservative Tree House  on June 8, 2020 by sundance

When you know the playbook of Benjamin Crump; and you understand the playbook of how the AME grievance network intersects with the playbook of Crump; it is easy to predict activity.  George Floyd’s life wasn’t what mattered, the political opportunity was.

This election year opportunity brought together Ben Crump, James Clyburn, Joe Biden and the DNC.  The death of George Floyd was the vehicle, the opportunity, that created the background for the network to align for mutual interests; money, power and politics.

I have no idea where Ben Crump was when this picture was sent from his phone.  But his phone was located in Tallahassee when he sent the tweet at 2:40pm today.

Keeping in mind that everything in Crump world is always sketchy and manufactured, it is not surprising to see articles describing Joe Biden meeting with the Floyd family by using Roger Floyd (above far right).   See if you can spot the obfuscation:

[…] Biden and his wife, Jill, traveled to Houston to meet with the family before Floyd’s burial Tuesday, according to Biden’s campaign.

Biden is no longer expected to attend the private funeral service and burial in the Houston suburb of Pearland, but he will provide a video message for the funeral, according to The Associated Press. (read more)

So the narrative of Joe Biden meeting with George Floyd’s family is derived from Joe Biden coordinating with Benjamin Crump to meet uncle Roger Floyd somewhere (looking like he just walked off the golf course); as Ben Crump tweets the picture of the meeting between Roger and Joe from his phone located in Tallahassee.

Skip to the next article from the Associated Press on today’s events:

(Via AP) – […] Former Vice President Joe Biden was to travel to Houston to meet with Floyd’s family and will provide a video message for Floyd’s funeral service. Previous memorials have taken place in Minneapolis and Raeford, North Carolina, near where Floyd was born. (read more)

Again, where was Joe Biden when he recorded a video to share at the funeral tomorrow and why didn’t/doesn’t Joe Biden just attend?

Obviously the recording of the video is not intended for the small private family funeral.  The video serves a larger purpose.   The DNC and Biden campaign director James Clyburn are the background puppeteers in this scenario; and, well, quite frankly, they have completely botched up their use of Floyd.

Now, Ben Crump doesn’t really care.  Crump’s interests are narrow and the $20 million GoFundMe account is a solid thing regardless of what happens.  The politics is not Crump’s lane to travel for these types of issues.  Clyburn and Sharpton are the political navigators who use the New Black Pandering Party as tools for power and affluence.

All of that said Texas Governor Greg Abbott also visited the family of George Floyd today to pay his respects in advance of their funeral tomorrow.  This allows a little opportunity for a ‘compare and contrast’ between Governor Abbott and Vice President Biden.

Here’s what meeting the family of George Floyd looks like from the perspective of Texas Governor Greg Abbott:

Today I spent time with the #GeorgeFloyd family.

They are wonderful, God loving people.

They will be the centerpiece of helping America bridge our racial divide & ensure equality, justice & fairness for everyone in America—& ensure what happened in Minn. never happens in TX. 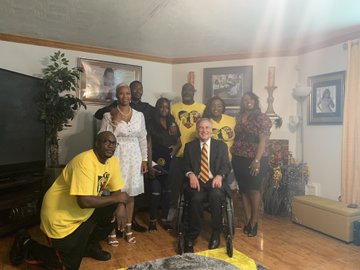 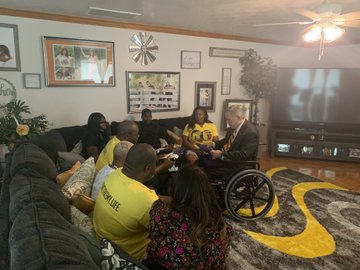 3,784 people are talking about this

And again, here’s the meeting from the perspective of Joe Biden:

Notice anything different?  (Or Missing)

It was all done by design….

It was all a complete farce…

However, in the middle of their grievance tour the national narrative they initiated to kick-off the tour, collapsed.  By the time they got to the end of the trip they had $20 million in GoFundMe money, and one semi-related uncle to support the pretense, but the political value of their effort had vanished.

Moral of the Story: Never underestimate the ability of the American electorate to sense or sniff-out the bullshit.