This COVID-19 is a virus that will be with us into the next couple of years, yet it will mutate as all viruses do. We need a completely new crop of politicians because lockdowns are not the answer. Do these people really think they can keep locking people down for the rest of our lives every time there is a new virus? This is NOT a solution! We must live with viruses and we cannot hide in a corner for the rest of our lives.

These politicians with the media have terrorized the population and destroyed so many facets of the economy from all you can eat buffets to sports and conferences no less travel for vacations. The answer is not a lockdown every time there is another virus case that CNN, New York Times and the Washington Post immediately proclaim you will die because politicians have reopened the economy. The media and politicians have no problem with people losing their jobs, their homes unable to earn income, the destruction of the food supply, and imprisoning the population as a whole when there is NO such historical precedent for such action in 6,000 years of recorded history. You quarantine the sick – not everyone. The Attorney General has ordered prosecutors to bring charges against governors and mayors who go too far in these lockdown orders. Even in Germany, the Government’s analyst that told Merkel the virus was being exaggerated has called for an investigation of Merkel and her actions with respect to COVID-19. 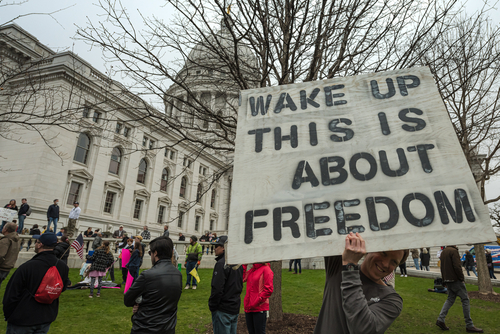 The media including YouTube are out to destroy the economy solely for political purposes. YouTube removes any free speech to silence any possible debate against the World Health Organization and this is not only anti-American, but it is also outright oppressive tactics that were employed by the Communists in their revolutions in China and Russia. The United Nations would never allow another to present evidence contrary to Climate Change. The media is doing the same thing and this is NOT in the interest of free speech or civil rights no less Human Rights. They are dividing the people and only furthering civil unrest. All they see is winning their agenda and oppressing the people no different than the Communist Revolutions. This will NEVER return to normal simply because they win. Their irresponsibility is offensive and undermines civilization itself.

ANY media organization which suppresses a debate should be shut down as a threat to National Security for they are inciting civil unrest and those making such decisions should be charged with sedition.

Whoever incites, sets on foot, assists, or engages in any rebellion or insurrection against the authority of the United States or the laws thereof, or gives aid or comfort thereto, shall be fined under this title or imprisoned not more than ten years, or both; and shall be incapable of holding any office under the United States.

(June 25, 1948, ch. 645, 62 Stat. 808; Pub. L. 103–322, title XXXIII, § 330016(1)(L), Sept. 13, 1994, 108 Stat. 2147.)
Bari Weiss’ resignation letter from the New York Times is a damning pronouncement of what the media has been doing. The FREEDOM OF THE PRESS is not the freedom to indoctrinate people with their political views. That is not what the First Amendment protects any more than yelling fire in a movie theater to see what would happen. The editors and owners should be hauled out of any media organization and criminally charged. The media should be put on notice that they MUST provide an honest debate to BOTH sides of any question that impacts National Security. If Russia was doing this to deliberately undermine the US economy, they would argue for war. Here we have domestic threats and nobody is doing anything about them.

Delinquent mortgages peaked in 2010 at  9.3%. As of March 31st, 2020, the reporting banks serviced approximately 15.4 million first-lien residential mortgage loans with $3 trillion in unpaid principal balances which were 28.7% of all residential mortgage debt outstanding in the United States according to our database. The implications are far-reaching both for the credit market and the individuals not to mention the real estate markets particularly in the Blue States where the lockdowns have been the most drastic.

The question we must face is that in the next election, ANY politician who has voted for a lockdown should be REMOVED from office. Even Anthony Fauci should be fired if not tarred & feathered and his name should be remembered by historians as an irresponsible official who had no regard for the people he pretends to be so concerned about.